So obviously this post is going to have spoilers. If you have not seen Batman v Superman yet, please scroll on past this.

Is everyone who hasn’t watched it gone yet? Ok, here we go.

I’ve noticed recently that a great lot of people have been poking fun at the whole “Martha” sequence near the end of the battle between the title characters. A lot of memes have risen up due to this scene. This meme seems to show the common thought process. 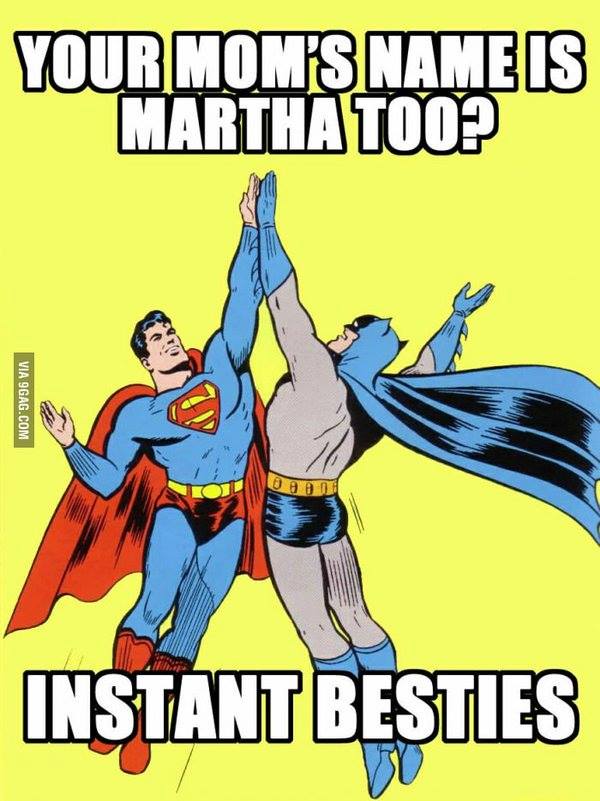 But the answer for why Batman ended the fight there is probably not that simple. While I can’t speak for Zach Snyder, here’s my take on what happened in that scene.

The name “Martha” is not the reason that this fight ended. That seems clear enough. Batman is still threatening him after he spoke Martha’s name. In fact, he appears even more aggravated than before. If we consider that Bruce Wayne has a great deal of mental disorders, because he does, this moment makes perfect sense.

He still remembers his parents dying in front of him. I do not think that he was just confused. I think he was terrified. I am almost positive that Bruce Wayne was having something akin to a PTSD episode, with “Martha” as the trigger. I think that if what happened next hadn’t, then Batman would have killed Superman.

The only reason that fight ended without Superman dead was because Lois came in to explain that Martha was Clark Kent’s mother. I don’t think that the fact that their mothers had the same first name was what made him calm down. It was the word “mother” itself.  He’s staring down at this being of incredible power who could demolish the planet if he went rogue, and now he knows that Superman is just trying to protect his mother.

With this in mind, there are a couple conclusions we could take from this.

The first conclusion is that Batman is concerned for this woman who is about to be killed. He couldn’t care less that it’s Superman’s mother. He could care less about Superman. He is just concerned about protecting an innocent. After all, that is what Batman does. He is the Dark Knight. So he’ll work alongside this person he hates, but only to protect her. He fought Doomsday for the same reason.

The second conclusion, and my personal theory, is that it really didn’t occur to him that Superman had a mother. Obviously beings don’t just spring out of the ground, even ones with super powers. But it still doesn’t mean Bruce gave it much thought, if any. In that moment, his speech about Superman not being a real man fell pretty flat. Now a light bulb goes off inside his head. Superman feels fear. Superman feels compassion. And Superman will do anything he can to protect his loved ones. He was not a self-centered god figure at all.

As a Facebook commenter put it, “In the midst of death he was thinking of others, not of himself. Even if he died he begged Batman to save his mother – that is the definition of humanity. When Batman realized Superman did indeed have humanity, Batman found his own humanity again.”

So maybe he still didn’t like Superman. They probably didn’t become “besties” in that moment. It’s very plausible that he’s still pretty peeved about the events of Man of Steel. But someone’s mother was  in danger, and they needed a Dark Knight to save them.

So what are your thoughts and theories? Please let me know in the comments, and give the post a like if you enjoyed it!