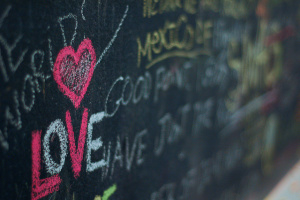 I feel like bragging about my folks today. If anyone ever wondered where my nerdiness comes from, it is most definitely from my parents. They may seem normal to most, but deep down they are the truest nerds that have ever walked the planet.

My mother is a Trekkie. My father is a Star Wars fan. I don’t know what the name is for that. Star Warsian? I don’t know. Neither does he, so he just says that he likes Star Wars. The two have some good banter on the topic, most often happening while we are watching one of the two shows. Dad says that Star Trek is too boring. Mum says that Star Wars is just mindless fighting. It’s like the South Pole and North Pole under the same roof. And yet I know for sure that whoever I get married to, I would want my marriage to look like theirs. They basically met through nerdiness, because my Mum wasn’t really interested in my Dad at all before they started dating. She thought he was just a big brawn-before-brain kind of guy. But she learned that he was far more than that. There’s more to this, but that’s a story for another time.

But there is one thing that brings them together. What is that? J.R.R. Tolkien. When we were eight, my Mum read The Hobbit to us at night. When we were thirteen, we were finally allowed to watch the Lord of the Rings trilogy with Dad, and every year, without fail, we sit down to give it a watch. I can’t think of a single year that we have not taken the time to do it, even while I am in college.

My parents were the first ones to watch the first “The Hobbit” movie, not me. I got the review of the film from my mum the next day while I was trying to study.

And when my parents heard that I was writing a fantasy book, it was as though their dreams came true. Both my Mum and my Dad have been keeping tabs on it the whole time, and have even helped make many of the creatures and some plot twists.

So if you ever feel like your nerd romance will never work out, take my parents as an example. It totally does, and they’ve raised some epic children as well if I do say so myself.

The moral of this story? Being yourself is the best thing you can ever be. If you want to get a true soul mate for life, don’t be afraid to show who you are. It might be pretty awesome.

This is the newest podcast. It is a lot more off the cuff than last weeks, and so you can expect some more “uh”s and “um”s. Basically, we talk about how nerdiness affected our writing and continues to do so.