END_OF_DOCUMENT_TOKEN_TO_BE_REPLACED

APPEARANCE
Noggards are most similar to serpents, except for their proportionately short, stubby legs. However, they are not the typical size of a serpent, not even for Vaelan standards. Their adult form can sometimes grow to a length of about 12 meters. If these same adults lift their head, it will be over 3 meters tall. Noggard queens are said to be even longer, occasionally growing up to almost 20 meters.

They have something of a covering like scales. However, the tips are sharp at the end. They can sometimes become long enough to make tracks from their belly as they walk.

END_OF_DOCUMENT_TOKEN_TO_BE_REPLACED

After I found some awesome info on building fictional religions, I thought I would share some of the ones I have planned for the Dark Veil books!

Followers of the True King

Nobody has heard from the True King since, but the True King’s followers believe that the King will return to make war and defeat King Laecon once and for all.

Followers of the Universe

These people believe that the sky, the sun, the moon and the stars are the body of a giant one-eyed goddess. During the night, the goddess is open to prayer and suggestion. During the day, the goddess begins her work from suggestions the night before or her own will. This goddess is fickle, and it is often hard to tell if she will actually listen to the people’s suggestion. The more open her eye is (the moon being her eye), the more interested she is in listening.

When a person dies, if they are good enough, they will become one of the stars in the sky, a part of this goddess.

They are firm believers in allowing change. Like the tides, they flow with the situations of life, as they do not believe that people can change their situation.

Followers of the Dark Veil

Many believe that the Dark Veil has a direct contact with King Laecon, who fought against the True King in a 400-year-war. Laecon has no problem with toting this belief everywhere he goes.

Followers of the Great Void

These people believe that there are gods, but that they are uninterested in their creation after they create them. They believe that all bad things that happen are a result of their feuding amongst themselves. As such, their only consolation in the world is to either accept the bad things of life or to die – to go into the void of nonexistence and never return.

They avoid having children and will often recruit orphans. Angsty teenagers often try to join but the priests insist that they consider their decision a while before doing so. 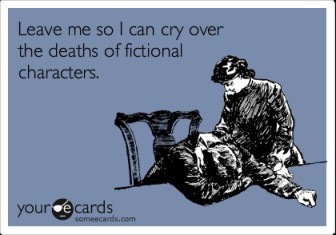 First page of the first chapter is now in audible form! Big things are coming.

Perhaps as someone who hasn’t published much except a few things online, I don’t have much of a say in this. However, it seems to me that the writers who excelled are the ones who didn’t try to be anyone but themselves. They may have been inspired by other authors, even borrowing some things from their style. In the end, their stories were still their own.

I tried so long to be like J.R.R. Tolkien and Charles Dickens and C.S. Lewis. It was all a failure, really, because I wasn’t reaching my true potential. My potential is not reached in trying to be someone else. I am not someone else. I am me. I write very distinctly and definitely with intensive detail. While I may be inspired by other authors, I cannot allow their styles to overshadow my own.

Maybe I’m going too far with this, but I don’t think I could be more insulted than being told I am the next version of an old author. I do not want to be the next C.S. Lewis, although I love C.S. Lewis. I don’t mind it being said that I write like a certain person. I have someone who I write somewhat like. I am fully aware that we have similar styles, and we’re actually good friends.

(This would be the fantastic Caitlin E. Jones that I am referring to, by the way. She is currently writing Chimehour, an excellent Gaslamp Fantasy.)

Still, our stories and content are very different, and I think both would be happy to say that we’re different.

Don’t try to be the next J.R.R. Tolkien or Emily Dickenson or Ernest Hemingway or Robert Frost. They’re all dead. Just try to be you, and you’re already on your way to greatness.

They’re all dead. Just try to be you, and you’re already on your way to greatness.

Just try to be you, and you’re already on your way to greatness.

Write the book you want to read.

If there’s something you don’t like in books, make a point not to put it in yours.

If there’s something you think modern books need more, put more of it in yours.

Write what you want to write and screw what anyone else says.

I would have never imagined the day! I am crazy excited!!

Thank you guys so much! You’re such gems.

For those who are interested, I have another Tumblr for my books called @darkveilbooks . The Dark Veil Saga is a Dark Fantasy/Steampunk series, and I plan to get the first book out by early next year. I haven’t done much on it yet, but more will be coming!