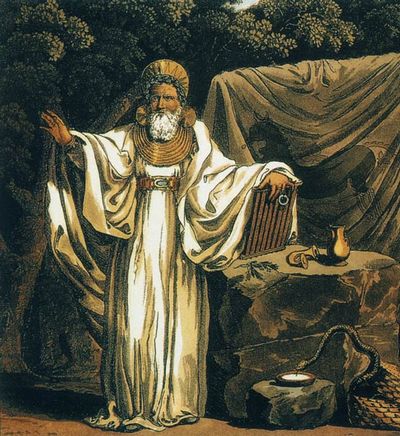 So I keep on doing this thinking thing. It seems to be getting me into trouble. Still, it helps with world-building for the Dark Veil saga. But I think it’ll help out all the rest of you who are world-building, too. So give ear to my speech – or rather, my text.

Let’s say you’re making a religion for your high fantasy novel, or just any fantasy novel. Most of them do have one, whether its true or not. But how does one go about doing it? For the Dark Veil saga, with the creation myth. I based it loosely off a mixture of Judaism and Egyptian mythology. Strange mix, since the two don’t really like each other too much from what I understand. Apparently keeping an entire nation in bondage for four hundred years and then attempting to destroy them multiple times afterwards brings about really long grudges. Anyhow, I needed a god, a hierarchy of created beings, and some spiritly servants of this god (which seems to be a recurring theme). Then I had to make a period of peace which would all fall apart awfully. Then I had to make some way for a salvation process.

But after your whole creation myth is done, what do you do? There’s got to be more to this religion than a simple myth to start it off. Sadly, I hadn’t even thought of such a thing until just recently when I saw a Tumblr post on the concept. So, exactly what else is involved with making a religion? To both summarize and continue the thoughts of this post, here is how I would respond:

1. Worshippers and a way to worship
Think about it. If you have a god or gods, they must have some way of being pleased, even if they don’t require that you try to please them. In Earth religions, that involves worshipping in some way or another. You have to pray or sing or chant or sacrifices goats or bow towards some general direction at some specific time. There has to be something of some sort to do. Otherwise, it’s just a belief system and not really a religion.

2. Worship leaders
We can’t just have these crazy worshippers wandering around aimlessly! What kind of a religion is this? So we have to have someone to make sure everything is going smoothly and all are worshipping the right way. (This is why lots of religions get upset at Christians. It seems like chaos, with all this lack of a distinct prayer time and precise way of worship. But there is order in disorder, trust me. Pastors and stuff.)  There should probably even be order among the orderers. My mind goes to church again – not just leaders, but bishops, senior pastors, assistant pastors, music directors and deacons! And they are typically wearing something to differentiate them from the regular worshippers. You can basically choose anything you so desire for these sorts of things. Sadly, I do not have this down for the Dark Veil saga. But I will, eventually.

3. Holy Holidays
Celebrations are in order! Whether it’s celebrating someone’s birth, death or the beginning of a season, most if not all religions have a holiday. Thankfully, this is the one thing I had before I saw the post. In the Dark Veil saga, I have one holiday set in stone so far: the Day of the Phoenix, celebrated during the winter equinox. It is believed in their religion that a phoenix’s yearly cycle is based on the arrivals of winter and spring. The Day of the Phoenix, then, is actually the celebration of both its death and rebirth. Alongside many odd traditions, they celebrate by burning a dead tree in order to use its ashes as mulch in order to plant a new tree once Spring comes around. Your holy days can be much simpler or more complex than this, but holidays are a great idea for a religion.

4. Disagreements
Nobody’s going to agree on absolutely everything. That’s the beauty of human interaction. So the worshippers and/or leaders are probably going to disagree on something somewhere in their holy text. For instance, in the Dark Veil saga, there is some debate as to whether the “four prophets” prophecy is a reference to four literal people who will save the nation or a reference to four time periods of salvation for devout followers of the faith. Those who believe in the “time period” are more willing to go to battle, while those who believe in the literal translation would rather wait for a literal prophet to save them. But religions are often divided into sects on such matters. So what divides your religion?

For all the other fun stuff, check out the post I reference at the very beginning of the post. What are your thoughts? Was this helpful? Let me know in the comments section!

2 thoughts on ““Ohmmmm”: A Discussion on Constructed Literary Religions”